Also send a copy of your email to your local member of parliament:

NB Some MPs and Senators now use a contact form and have no public email address. We have used the standard format for their emails in the lists below, but take no responsibility if the email bounces. 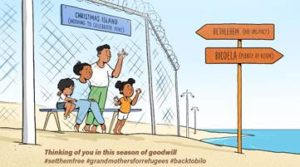 2019 e-Xmas card – download, copy and paste into your email to your favourite MPs and Senators.
Feel free to use this image in emails to politicians at Christmas – calling for the Biloela family to be freed.
(Thanks to the Grandmothers and – Jack Chadwick for this e-Xmas card) 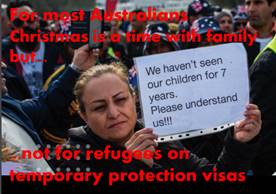 Postcard Calling For Family Reunion – download, copy and paste into your email to your favourite MPs and Senators.
(Thanks to Justice for Refugees)

#Save Medevac Postcards – print and send to Senators in your State

Voices of People with Lived Experience

Presentations from the ARAN Conference 2018:

The Birds, by Moz with Ruth Mundy: ARAN is happy to share Moz’s song.

The Merger. There’s a preview at https://youtu.be/hwxhEp-CtnI

Poetic and hypnotic, Island of the Hungry Ghosts presents a unique and moving meditation on politics, people and primeval nature. As trauma therapist Poh Lin gently coaxes detainees to tell their stories, Christmas Island’s willing residents perform “hungry ghost” rituals for spirits whose lack of proper burial has doomed them to wander its jungles for eternity. Meanwhile, the crabs march across the land in their millions, in an endless cycle that repeats every year.

Border Politics a film by Julian Burnside brings a sense that Australia is not being true to its image of itself. This contemporary story is about the threat to human rights, the loss of democratic values and our increasingly heartless treatment of ‘the other’.

Stop the Boats tells the story of how Australia used a three word slogan to demonise people seeking asylum fleeing war and persecution, condemning them to indefinite offshore detention and torture in prison camps on Manus Islsand and Nauru. The stories of the experience of asylum seeking are told by asylum seekers including children from within detention centres, secretly filmed in Nauru and Manus.

The Truth About Manus Island on YouTube.
Added by Studio 10 November 19 2017. Executive Director of the Human Rights Law Centre, Hugh de Kretser, speaks with us about the crisis on Manus Island.

Don’t take them: warning from a former Manus Is guard RNZ Checkpoint
on YouTube. Added by RNZ November 13 2017. A New Zealand man who worked at the Manus Island refugee detention facility is warning the government against taking any refugees, saying the ones still at the centre are dangerous men.

Explosive footage from inside the Manus Island detention camp. Recorded by GetUp November 2017.

The Forgotten Children: Four Corners visits Nauru on YouTube. Added by ABC News (Australia) October 17 2016. There are 755 refugees on Nauru and 128 of them are children. Both the Nauruan and Australian governments say they want the refugees moved on from Nauru, but they have been unable to reach agreements on where else they could be sent. While that stalemate continues, many of these children are struggling to hang on to hope.

How Different Are We Flashmob 2016 on YouTube. Added by How Different Are We July 16 2016. A dance flashmob to raise awareness about the treatment of people who are asking for safety and protection. Celebrated on Nelson Mandela Day in Federation Square, Melbourne, the dancers question what Nelson Mandela might think about Australia’s current policy of detaining vulnerable people indefinitely.

Voices of People with Lived Experience

Nowhere Line: Voices from Manus Island. Documentary by Lukas Schrank
on YouTube. Added by the CGBros September 9 2016. **Award Winning** CGI 2D/3D Documentary. Check out this award winning CGI Animated documentary…An animated short film, narrated by two asylum-seeking men detained in Australia’s Manus Island Offshore Processing Centre, recounting the dangerous journeys that brought them to the island and their memories of the riot that erupted in 2014.

15 years in a refugee camp. How did I learn? Tulsa Gautam at TEDxJCUCairns
on YouTube. Added by TEDx Talks December 7 2015. After her parents fled religious persecution in Bhutan, Tulsa was born and spent the first 15 years of her life living in the refugee camp in Nepal. This experience fueled her passion for helping others and for education. Tulsa has an inspiring story of overcoming obstacles to achieve your dreams.

Being a refugee is not a choice Carina Hoang at TEDxPerth on YouTube. Added by TEDx Talks January 15 2014. Refugees are often marginalised, their humanity ignored as their stories go untold. In this remarkable and emotional talk, however, author and former refugee Carina Hoang discusses her experience as a “boat person”. It’s a powerful account that is impossible to ignore.

Links to other refugee advocacy organisations