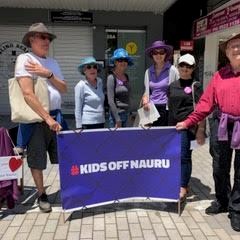 “Of the 222 minors who were on Nauru at its peak in 2014, only seven remain. Four have been accepted for resettlement in the United States, along with their families, leaving only three children from two families.”
(SMH January 8 2018).

Over 167,000 everyday Australians have joined the call to get #KidsOffNauru.

This campaign belongs to everyday people and any Australian organisation who believe we should put children first in the asylum seeker and refugee debate.

Read the Migration Amendment (Kids Off Nauru) Bill (second reading October 22 2018). Here’s the text of bill and the explanatory memorandum.

In essence, this Bill requires that all children on Nauru be brought to Australia for medical treatment, accompanied by their families. It is co-sponsored by the Member for Denison, Andrew Wilkie, Member for Mayo, Rebekha Sharkie, Member for Melbourne, Adam Bandt.

What you can do
– Add your organisation to the call,
– Read the ARAN Briefing Paper for those attending the APEC Leaders Forum in Port Moresby from 12-18 November 2018.

Teacher Union support
Three state AEU branches, the NSW Teachers Federation, AEU Victorian branch and the Queensland Teachers Union (QTU), will walk off the job on November 20, Universal Children’s Day, to demand the federal Coalition government gets kids and their families off Nauru.

“As teachers, the treatment of refugee children on Nauru is an anathema to our professional ethics and the care with which we support the learning and welfare of our students every day.” The Australian Education Union and the Independent Education Union of Australia.

If you are not a teacher you can print and cut  Teacher Supporter Badges fit in a badge holder and wear in solidarity with the teachers.

The Kids Off Nauru campaign was initiated by World Vision Australia. Here’s a list of 382 endorsing organisations (as at November 6 2018).

Please sign this letter to PM Scott Morrison and help get the children off Nauru.

Sick of writing to MPs?
Try calling instead.  Call your MP now  and also Scott Morrison and minister David Coleman. However, if you’re still up to writing, find your senator and local MP contact details and send them an email .

Not sick of writing?
You can email all senators and MPs using the details on this list of all MPs and Senators. Just copy all senators email addresses into the BCC box and address your email “Dear Senator”. Do the same for all  MPs, addressing your email to “Dear Member of Parliament”.

Go right to the Top
Email or call Prime Minister Morrison and Opposition Leader  Shorten to tell them that this shameful and cruel abuse of innocent people must stop, and to bring people to safety.

The four main messages to send
– Locking up children is never the answer
– You wouldn’t let your child grow up like this
– Our political leaders must end the harm
–  Australians deserve the truth.

Action you can take right now
Did you know that poll results indicate that 60% of Australians are unaware that refugee children are detained on Nauru?

The world’s refugee crisis is a complex problem but
– locking up children is not the answer
– around 117 children remain on Nauru with no certainty about their future
– Officially, the government says most are now free to move around. However, they all remain effectively detained as they are trapped on an island, which is less than half the size of Melbourne airport.

Share Videos
A group of young Aussie kids have appeared in an Advertising Campaign launched today asking the Prime Minister of Australia to save young children in desperate trouble on Nauru. Please share this video clip.

Share Images
Use these images in the #KidsOffNauru Campaign.

The world’s refugee crisis is a complex problem
But locking up children is not the answer:
– around 117 children remain on Nauru with no certainty about their future
– officially, the government says most are now free to move around
– however, they all remain effectively detained as they are trapped on an island, which is less than half the size of Melbourne airport. 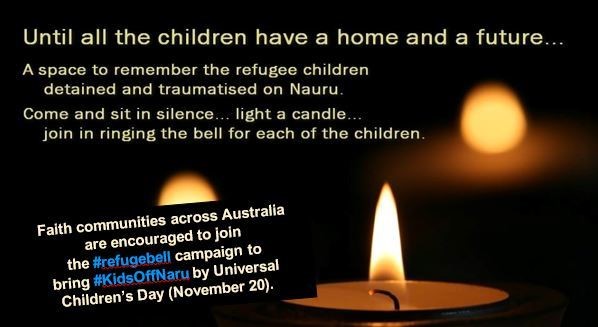 #KidsOffNauru is a sector wide campaign calling for Turnbull and Shorten to act to bring the 119 children and their families currently detained on Nauru to safety in Australia before Universal Children’s Day on November 20, 2018.

Please take note of this advice from World Vision about using photos of children in this Campaign
“Please be reassured that these photos have been thoroughly checked and approved by both the families with informed consent given and with the Australian Council for International Development and World Vision Australia to make sure we’re truthfully representing the scenario.”

Q. What does the #KIDSOFFNAURU campaign want?
What is the solution?
A.The Australian Parliament must act to bring every child and their family to Australia by Universal Children’s Day, on November 20:
– they should be either resettled in Australia or in another suitable country which welcomes them
– children in detention should not be discriminated against and must be given a fair chance for survival and development
– all decisions taken about offshore, indefinite detention must first and foremost consider the best interest of the child.
This is to ensure that these children will be able to face their futures with certainty and finally start to pursue their hopes and dreams.

Whatever the solution, locking up children is not it.

Here’s an idea:
Next time you order a coffee and they ask your name, say “Kids off Nauru” then when your coffee is ready they will call out “Kids Off Nauru” for the whole cafe to hear.

Media and Reports related to children on Nauru:
Read the media reports. 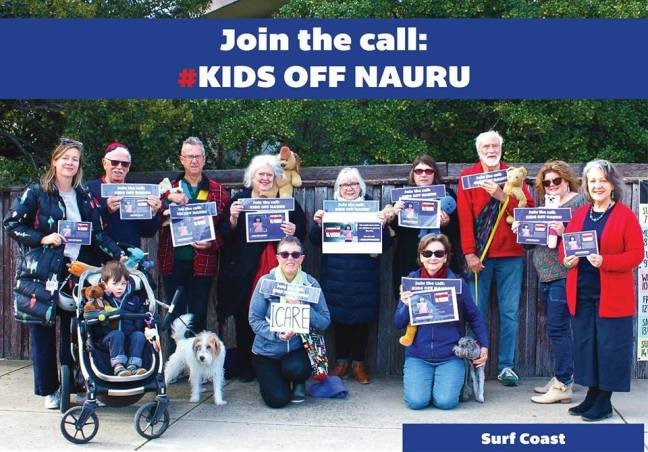