Australia will end offshore processing on Papua New Guinea by the end of the year, leaving Nauru as its sole regional processing centre….124 asylum seekers and refugees remain held in PNG, mainly in Port Moresby. Eighty-eight of those men have had their claims for protection formally recognised.  Those still held in PNG will be allowed to transfer to Nauru if they choose…. Those who stay in PNG will be offered a “permanent migration pathway … including access to citizenship, long-term support, settlement packages and family reunification”.  Refugees awaiting resettlement to America – under Australia’s refugee swap arrangement with the US – will still be supported while they await departure.  The PNG government will “assume full management of regional processing services … and full responsibility for those who remain”. (from report in The Guardian  6 October 2021.

However, since the initial announcement, there are concerns about just what will happen for those left in PNG

The offshore processing regime is enormously expensive – as well as destroying the hopes for a secure future for thousands of people seeking asylum and safety in Australia.

Seven years on from the re-introduction of offshore detention, nearly four hundred refugees remain trapped in limbo in PNG, and on Nauru.

Detained and denied
Around 200 people, mostly young men brought to Australia for medical treatment, have been held for nearly nine months in detention in hotels in Melbourne and Brisbane, and also more recently in Darwin.

Many of these people have not had access to the medical treatment they need and fear COVID-19 infection in the places they are detained.

It’s been seven years of separation from loved ones, deliberate cruelty, and deprivation of freedom in appalling conditions.

For seven years, Government has denied the right to seek asylum as described in the UN Refugee Convention.

Thousands have suffered under this policy as we exiled them to remote places in appalling conditions and destroyed their hopes.

12 young men have lost their lives, families have been separated, hundreds of children have been traumatised, and many have developed chronic depression and anxiety.

Our obligation
Australia is responsible for protecting refugees under international law. As a rich country built on migration and a commitment to democracy and freedom, we are better placed than most other countries to welcome refugees.

Instead, Australia has paid huge sums of money to Nauru and PNG to essentially warehouse refugees. Neither Nauru nor PNG can offer safe resettlement for refugees.

This has been going on now for 7 long years – 7 Years Too Long.

Over 700 people have been offered resettlement by the US, but those still on Nauru and in PNG, and hundreds brought here for medical treatment (including many living in our community) are still in limbo, as Australia is refusing to offer permanent resettlement.

Australia has also refused an offer by new Zealand to resettle these people.

#7YearsTooLong
We must bring an end to this needless suffering.
It’s time to abandon the failed policy that is offshore processing.

Here’s what you can do

Listen to this song: Love by Moz
“I dedicate this song Love to all the amazing people who are standing up for us and fighting for our freedom,” Moz.

Watch this video: #dialitdowndutton
Would you let Dutton take your mobile phone off you?

Watch this video produced by the Canberra Refugee Action Committee:

You can also download this video from Google Drive.

Listen to this song: How Long Must I Wait by musician John Hunter:

Actions you can take right now

1. Write a short email (see talking/message points below)
or copy and add this e-postcard:

Also phone your message through to their offices.

Here are some talking / message points:
• Resettle the remaining refugees here in Australia and also accept the New Zealand offer to resettle some of these people
• Release refugees from detention and support them in the community
• Give permanent visas so these people can become productive members of the Australian community
• It’s time to do the right thing; abandon the failed policy of offshore processing;  end their suffering; end our shame; permanent resettlement for refugees.

Here is a sample #7YearsTooLong media release that has more information you can use.

Find more ideas, suggestions, tips and images from the Refugee Advocacy Network website:
Links are on the ARAN Resources page.

2.  Share and circulate your message on social media:
Use these hashtags: #7YearsTooLong #SafeResettlementNow #GameOver
• Post a selfie with a sign displaying your message and the hashtag(s).
• Tweet these politicians:@ScottMorrisonMP @AlanTudgeMP
@AlboMP @KKeneally
• Add an image from these photo collections:
• End the Offshore Cruelty – Bring Them to Safety
• Refugees are Welcome – Permanent Protection for Refugees
• And this gallery: 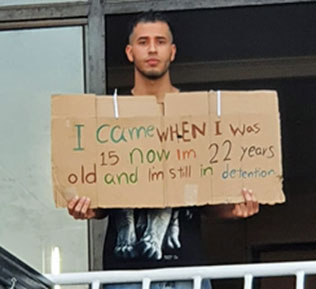 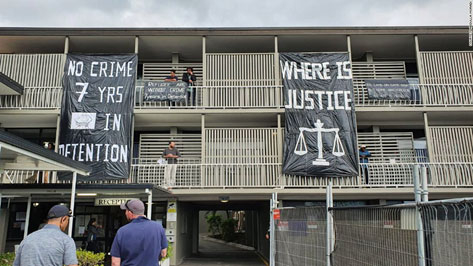 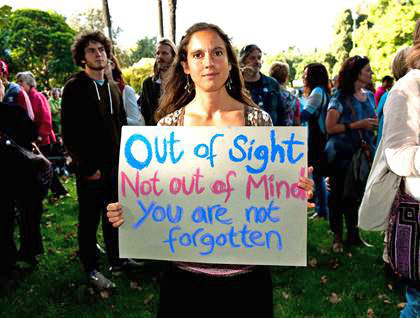 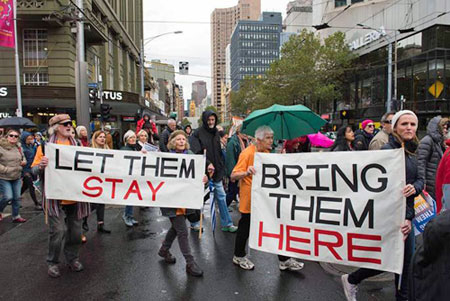 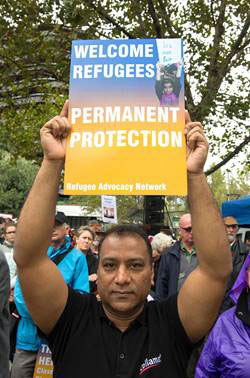 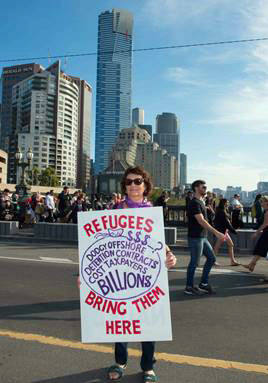 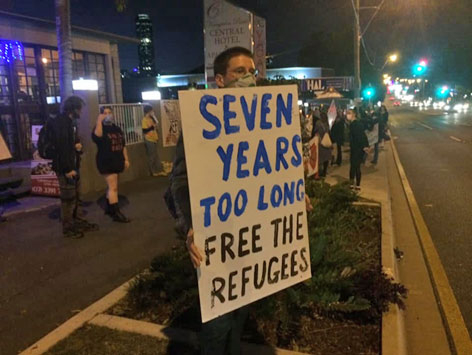 4. Organise a local action or join one near you:
Find out what’s happening in your area: actions around Australia.

On 19 July 2013, just prior to the federal election PM Kevin Rudd in a desperate bid to win votes, announced that offshore detention would be reintroduced, and that no person seeking asylum who arrived by boat would ever be resettled in Australia.

Every single person arriving after that was subject to indefinite detention on Manus Island (PNG) or in the Republic of Nauru, under ‘processing’ arrangements with the Australian Government.

The policy costs Australians around a billion $ per year, plus the enormous human costs.

One 10-year-old boy had attempted suicide three times on Nauru. Doctors said he was at critical risk of killing himself, but it took a Federal Court order to force the Government to keep this child safe. Brought to Australia in response to the very public Kids Off Nauru campaign in late 2018, these children and their families still have uncertain futures as they are denied permanent protection visas; see theguardian.com/australia-news/2019/aug/25/ (?).

Australia’s policy of offshore detention has been condemned by UN High Commissioner for Refugees, the Australian Human Rights Commission, and countless whistle blowers, including the government’s own doctors and administrators, and has prompted complaints to the International Criminal Court.

Australia’s ‘deterrence’ policies violate human rights and are in contravention of the UN Refugee Convention, the policy of indefinite detention contravenes International Law.This offshore ‘processing’ regime has delivered gross abuses and has left innocent people who sought our protection in a state of despair and hopelessness.

Australia has lost considerable status as a global citizen, and has essentially ‘bought off’ the small nation states of Nauru and PNG by offering huge financial incentives to facilitate offshore processing.

Statistics and other information on the offshore processing regime on the
Refugee Council of Australia website.

Unfortunately the Australian Government has repealed (cancelled) the Medevac laws.We know that this news is extremely difficult for all people going through the Medevac process.We are working to understand what this will mean for your Medevac application. We will continue to support you and other people in PNG and Nauru through this change.When more information about the impact of this decision is available, we will provide it to you. If you have made an application to MERG in the past, our team will contact you as soon as possible. More information is available on the website: https://merg.org.au/.

People remaining in PNG and Nauru
As of 30 September 2019, there were 562 people on both Nauru and PNG, with a further 47 people detained by PNG in Bomana Detention Centre. As of 21 October 2019, there were 3 men left on Manus Island, with the rest having been transferred to Port Moresby. As of 30 September 2019, 632 people had left for the US.  Information provided by Refugee Council of Australia

WE CANNOT REST WHILE PEOPLE ARE IN LIMBO ON MANUS AND NAURU.

Email or call Scott Morrison and Anthony Albanese to tell them that this shameful and cruel abuse of innocent people must stop, and to bring people to safety.

Find contact details for your local MP here: www.aph.gov.au/Senators_and_Members/Members
… consider sending your email (BCC as a group) to all MPs and Senators.