View past editions of ARAN Updates below.
Subscribe to future editions (delivered to your email inbox).

ARAN Update December 2021
There are a couple of urgent actions before Christmas and also in January.
Find out more.

ARAN Update September 2021
Response to the crisis in Afghanistan.

ARAN Update March 2021
Be part of the national Palm Sunday action calling for Justice and a Fair Go for Refugees: justice4refugees #GameOver.

ARAN Update November 2020
Resettlement for refugees still held in PNG and Nauru, Onshore detention issues, Call on ALP to speak up for Refugees and more.

ARAN Update September 2020
The Senate to vote on the Character Test and Prohibited Items Bills:
contact your Senators now and more.

ARAN petition January 2019
On Thursday 31 January 2019, the ARAN petition calling for Justice For Refugees, was mailed to Federal Parliament’s Standing Committee on Petitions. The petition, addressed to the House of Representatives, was signed by 8,451 people. 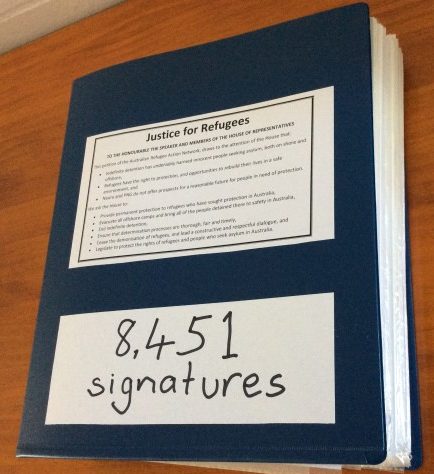 The Standing Committee will count the signatures and when processed, the petition will be submitted to the appropriate minister. The minister has 90 days to respond. Thank you to all those who signed it and special thanks to those who worked to collect all these signatures.

Return to top of the page