An archive of past campaign, actions and event information originally published on the ARAN website’s campaigns and events pages.

GetUp! No Business in Abuse

5 Years Too Many
5th Anniversary of Offshore Detention
Monday July 16 to Sunday July 22 2018.
Find out more.

Citizenship Bill
Submissions closed on April 27 2018.
Don’t miss your chance to say “NO” to proposed changes to citizenship law. The Parliamentary Committee online survey which allows you to express your view on the Australian Citizenship Legislation Amendment (Strengthening the Commitments for Australian Citizenship and Other Measures) Bill 2018 closes at 5pm on 27 April 2018 AEST.
The proposed legislation would require an eight year wait to apply for citizenship, instead of one year. The Bill also demands much higher-level English competency for citizenship.
Long waiting periods for citizenship and excessively high English competence are unjust, unfair and cruel barriers to the most vulnerable new arrivals, who have so much to contribute to Australia as citizens.
Written submissions can also be sent to Citizenshipbill@aph.gov.au. Please circulate this message to community members and stakeholders.
See sample submission on the Bill here.

Palm Sunday 2018
Thousands took to the streets across Australia in 2018.
Palm Sunday rally photos 2018 and on our Facebook page. 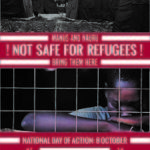 Rallies were organised for a
National Day of Action on
Sunday October 8 2018.

Current events in all states and territories